Tom Wang Review: Is His FBA Masterclass Strategy the Best Out There? 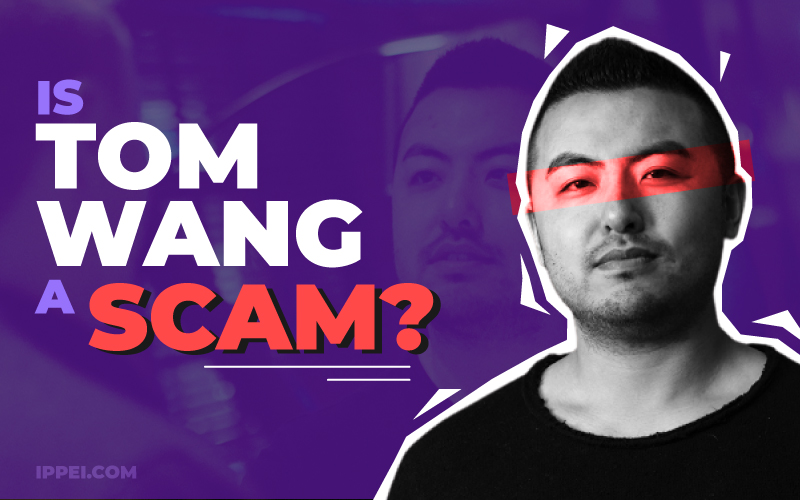 Tom Wang is a 7-figure Amazon FBA private label seller with 7 years of experience. He and his wife, Christina, have developed multiple private label products like a Vitmain C serum and Derma Roller. They could even sell their brand, Sdara. Besides selling on Amazon, he has an active YouTube presence and is the founder of a popular course, the FBA Masterclass.

Should you trust Tom Wang to teach you how to make money online? Is it the best course for your entrepreneurs and aspiring sellers? Is private label the best way to sell products on Amazon? In this Tom Wang review, you'll find out.

Private label isn’t all about the 40% profit margin…

Of all Amazon FBA business models, private label has the potential for the highest profit margins. You have more control, so you can choose the original cost of the product and its Amazon sales price. Also, there's a smaller chance that you'll fight a price war for the buy box, because you should be the only product there.

But, private label is extremely expensive to start. Tom encourages you to find boring products that cost only $1-$2/unit, but that’s not the only cost. You'll also pay for the creation of your brand, a logo, paid traffic, test products, product photography, and much more. Or, you might build a social media following for your product, pay for influencers to use affiliate marketing to promote it, and use paid ads on Facebook to drive traffic. Expect a $15K-$20K initial investment if you want to boost your Amazon FBA success rate.

Has sold a private label company

Course provides a mentorship, but not exclusively with Tom

The Man Behind the FBA Masterclass: Tom Wang’s Success Story

Tom was born in Harbin, in northern China near Siberia. His father had grown up an orphan on a farm, and had dreams of immigrating to the United States. So, Tom lived in Harbin until he was 10 years old. His father moved the family to Canada, where immigration laws are much more lax.

Tom remembers being struck by how simple school was in Canada vs. China. In China, education was a grind. His future would be determined by the school he got into. In Canada, math class was easy, and society cared about sports and recess. Soon, he wanted to make money, but his mother didn’t want him to start a job at 12 or 13. She wanted him to focus on his education. So, Tom graduated high school and entered university. He partied, didn’t go to class, and was kicked out after the first semester due to low grades. He got kicked out of two more colleges. His parents were irate.

Even though Tom’s parents wanted him to focus on education, he followed the side hustle life. His very first business venture happened while he was still in elementary school in China. His dad brought US-made pens back from a business trip. Tom took the pens and sold them for a profit at school.

Tom also tried a newspaper route. When he was older, he bought watches for $5 and sold them on the streets. He scalped concert tickets and Canucks tickets. Tom tried and failed at 7 official businesses before anything stuck. 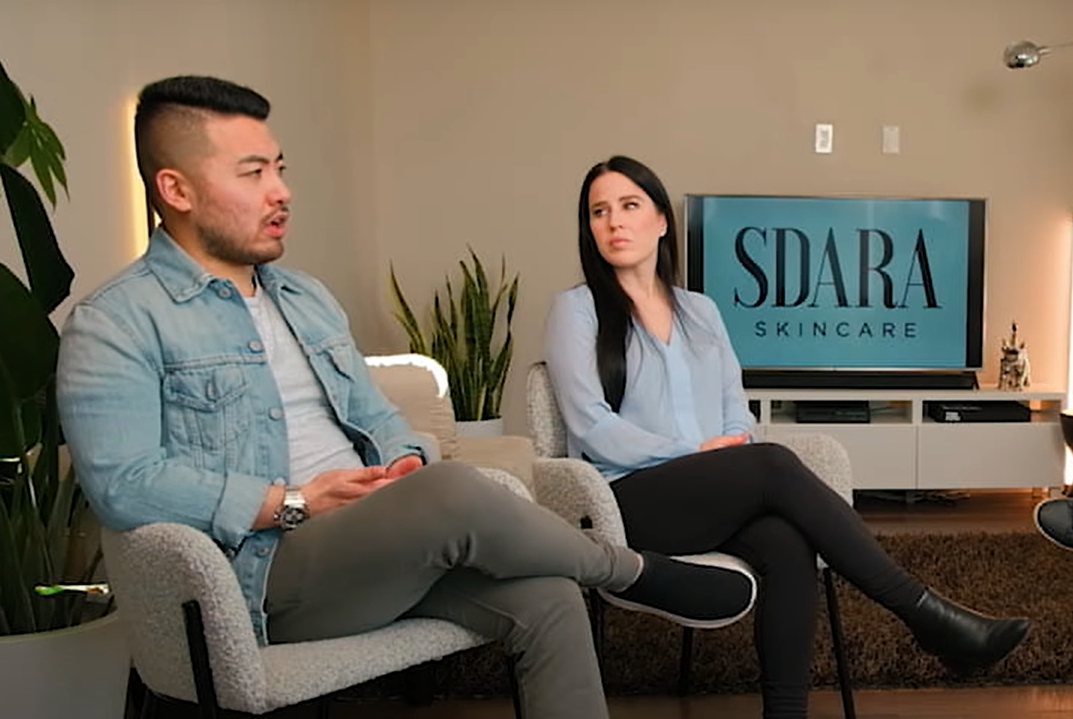 Tom Wang's wife is Christina, who helps Tom manage his Amazon business. They met through a friend while Tom was still in college. She moved to Vancouver for her corporate job, which she enjoyed. She planned to continue to work her way up the corporate ladder. Christina kept this job far into their Amazon FBA business.

In 2015, Tom got a 9-5 working at Yellow Pages as an account manager. In this role, he managed 450 accounts and handled over $1 million in revenue. On the side, he learned about passive Amazon income on Google, YouTube, and podcasts.

He also started selling hoverboards. Inspired by his own purchase and all the positive feedback he got from friends and strangers, he put $5K into it. He got a business license, a partner, and a website. After ordering the hoverboards from China, the problems started. There were issues at customs (the battery inside counted as dangerous goods), and 8 out of 10 hoverboards didn't work. It was difficult to get anyone to purchase a $600 product with no ads or organic traffic. Tom didn’t realize just how important marketing was.

Finally, someone offered to sell the hoverboards for him on Amazon. Tom thought Amazon was only textbooks. They got 3 sales their first day. Since they already had the inventory, they used the Amazon FBM (Fulfilled by Merchant) method.

Then, Amazon took down all hoverboard sales. Hoverboards coming from China were not well made. They were literally exploding in homes and even airplanes. But Tom had caught the Amazon bug.

Tom and Christina officially started Amazon FBA in 2017 with vitamin C serum. He hired Amazon coaches and quit his 9-5 in December of that year. They chose the serum because the numbers they ran showed that they had the potential to make hundreds of thousands a month in revenue.

They planned to market the serum by buying positive reviews, but Amazon made this against Terms of Service just before their launch. Still, they sold so well that they ran out of their 1000-2000 unit stock. This was the beginning of the Sdara brand.

Their second product was a derma roller. Christina quit her corporate job December of 2018. They hired a team and built off Amazon. Tom also started his YouTube channel. 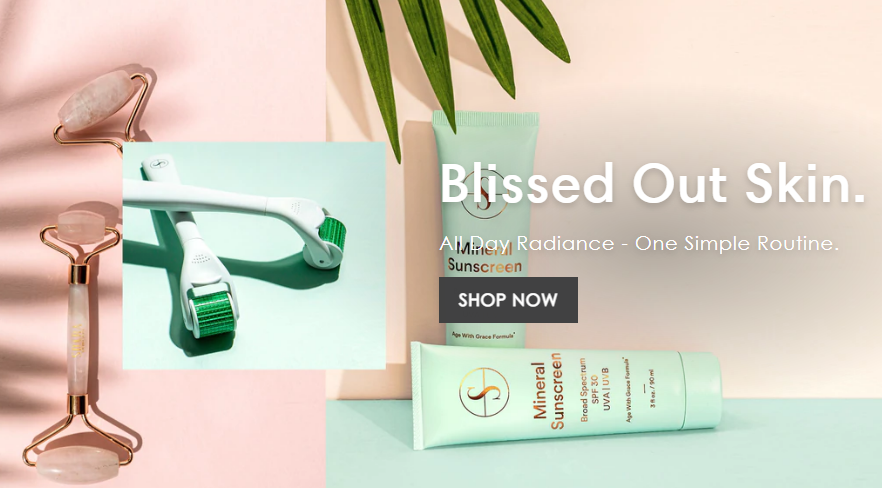 In 2019, Sdara had $3 million in sales. They began considering selling the brand. They looked into brokers, empire flippers, and others. 8 offers came in within the first week. Then, Covid hit, and everyone pulled their offers. Sdara's sales dipped by $750,000 in a month.

During the summer, buyers came back. But, they lowered their offer because Amazon’s Terms of Service had changed yet again and kicked their derma roller from #1 to #30. Tom and Christina turned them down.

Today, Tom and Christina are still together. They are both 8-figure Amazon sellers. He is still active on his YouTube channel. In later 2022, Tom will host a live event in Vancouver called the Million Dollar Side Hustle Night, featuring speakers on NFTs, AirBnBs, and eCommerce.

It’s estimated that Tom Wang’s net worth is around $2 million.

Tom Wang teaches the FBA Masterclass, a high-ticket Amazon FBA course. The course teaches you how to "rank and bank" boring products you use every day.

Tom also has an active YouTube channel, though he posts TikTok length videos and general information about business now. This is because of an intentional shift from more clickbait, beginner videos to things he enjoys.

He also has a podcast, the Tom Wang Show. But, the last episode aired in September of 2021.

How Much are Tom Wang Course?

Tom Wang’s class is $6997. While this is one of the most expensive FBA courses out there, it has actually come down from $8997.

If that is the actual Tom Wang cost, they must disclose it during your phone call.

What is the Tom Wang Course FBA Masterclass?

Tom Wang’s FBA Masterclass contains 13 modules of 300 videos. It teaches the Amazon private label business model. The course began in 2019, around when Tom and Christina were working on selling Sdara and after about a year of building his Youtube presence.

When Does FBA Masterclass Start or Finish?

FBA Masterclass is a self-paced course. It starts and ends along your own timeline.

No. This Tom Wang Amazon training does not offer refunds.

No, Tom Wang’s Amazon FBA Masterclass is not a scam. It teaches a potentially profitable skill at a quality level. However, its cost causes many to think it’s a trick. Just because a course is expensive doesn’t mean that it’s a scam. You will need to put in effort to get any real value and make this Amazon FBA model work. To follow Tom’s strategy, I suggest committing at least 2-3 hours every day.

"The community is probably the best thing.. Mainly because all of the students are on the same boat. Overall it’s a good support system if you need help." -Jonjon 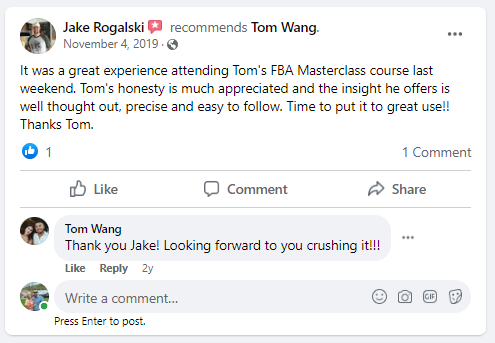 This Tom Wang review, and lack of others online, might be evidence of a strict NDA: 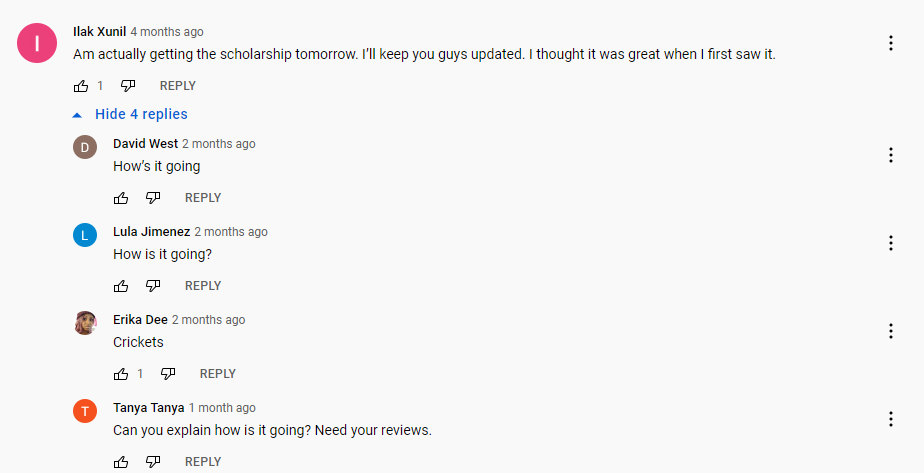 Upon searching for negative reviews of Tom Wang, we didn't find anything conclusive. Sometimes, people create negative reviews of courses and course creators without ever working with the coach or course. This can lead to falsified opinions online, so make sure to only consider reviews that seem legitimate and backed up with facts.

Tom Wang Reddit reviews may also lead you to believe he is a scam. However, a creator's marketing and their experience/course are different. For example: 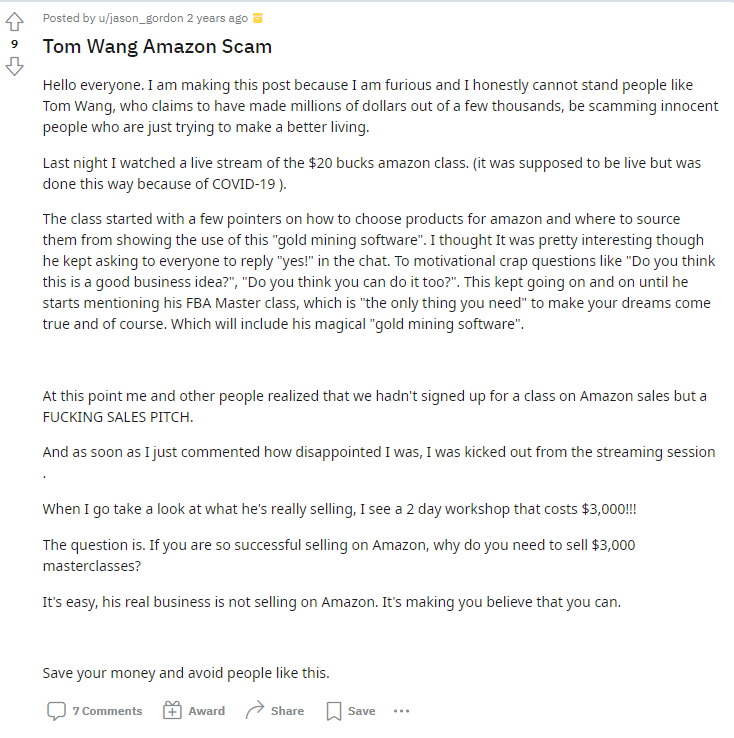 This person is calling Tom a scammer, when really, he is simply unhappy with his marketing. Here, Tom had used a webinar as a sales pitch. Using low-ticket (or even FREE) trainings is a tactic used by countless course coaches to hook interested people into their high-ticket courses. This doesn't make the high-ticket course a scam, rather, the process is an example of upsell model marketing.

Let's zoom in on the phrase: "If you are so successful selling on Amazon, why do you need to sell  $3,000 masterclasses?" Just like any master of any craft, you can teach that craft for additional income sources. Also, some people simply enjoy teaching others.

Is Tom Wang a Scam?

No, Tom Wang is not a scam. He has built up years of experience running multiple businesses, and has the accolades to teach an Amazon FBA training course. Selling an Amazon private label brand for $4 million is difficult.

You might think he’s a scam because of his intense online presence. However, he is decreasing his crazy ad spend on YouTube videos to focus on more advanced, professional content. Remember, just because someone’s marketing comes off pushy doesn’t make that person a scammer.

Tom Wang does a great job of both selling and promoting his course. However, Amazon private label is expensive to start, requires much work, and needs good marketing strategies behind it. I would not suggest trying Amazon private label unless you're very committed to the business model and researched it.

If you’re not sold on private label, there may be better alternatives outside the FBA world. Consider learning more about local lead generation instead. You won’t have to sell any products, negotiate with suppliers, or mess with paid marketing. We use organic ranking techniques to take locally based websites to the top of Google, sell the leads to local businesses, and bring in passive income. Learn more about Local Lead Generation.