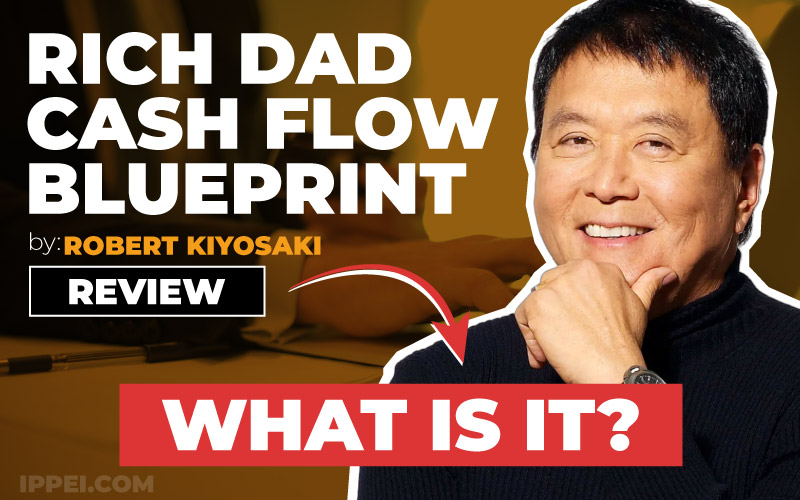 Cash Flow Blueprint is a real estate investment course under Rich Dad Company created by Robert Kiyosaki. The course claims to teach you the secrets of how to achieve financial success through real estate investment and survive the next economic crash. In this Rich Dad Cash Flow Blueprint Review, you’ll find out the truth about the famous Robert Kiyosaki.

Investigations and Lawsuits Against Robert Kiyosaki and Rich Dad Company

Is Rich Dad a Scam? That depends on how you look at it. To set the record straight, you can learn a thing or two from Robert Kiyosaki and his Rich Dad educational programs. What you need to know is whether it is effective and worth the price.

If you've been looking into real estate, chances are you'd have heard of Robert Kiyosaki. He has been featured on many shows, including PBS, Oprah, and the Larry King Show. He has also been criticized and investigated by various publications, such as the Wall Street Journal, Smart Money Magazine, WTAE (ABC affiliated), and Forbes. Kiyosaki, his company, and partnered companies were the targets of several lawsuits. 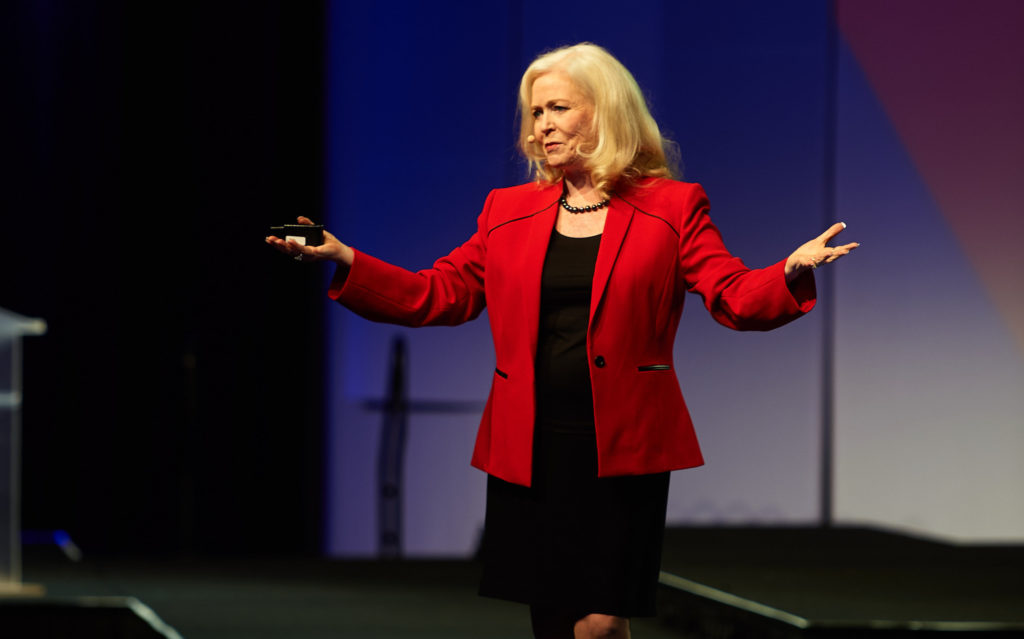 Sarah Lechter, the co-author of Rich Dad, Poor Dad, and former CEO of Rich Dad Co. for over 10 years, sued Robert Kiyosaki in 2007. The case was regarding her not receiving her fair share, which resulted in an out-of-court settlement with her winning $10M. 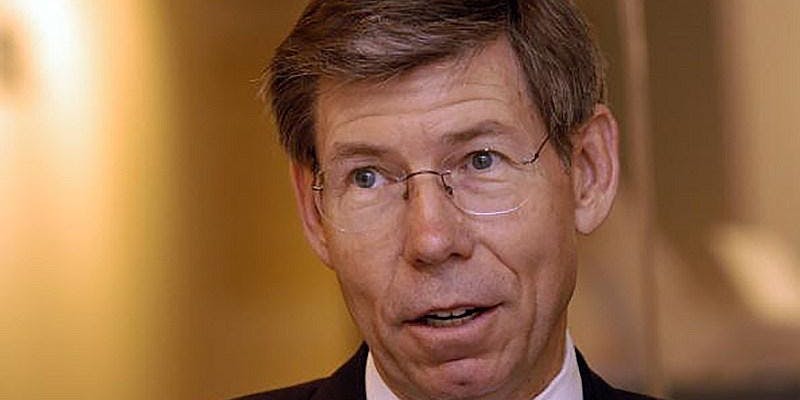 Kiyosaki conducts business through several companies that he either wholly or partially controls, as well as through franchise agreements with other businesses that are paid to use his name and sell courses. Included are Rich Dad LLC, Whitney Information Network, Rich Dad Education, and Rich Dad Academy.

The details are as follows:

The hidden cameras showed footage of the trainer, Marc Mousseau, advising participants to request that their credit card limits be raised to $100K in order to purchase their complete long courses that cost $12K-45K. He even gave instructions and handed out scripts on how to ask their bank to increase their limits.

Marc also claimed that he made $32M on a mobile home park deal in Saskatchewan. CBC traced the supposed trailer park and discovered that it did NOT exist.

The footage was shown to real estate lawyer Bob Aaron, who said that the lessons they were teaching were unusual and unlikely, such as saying a developer may give 2 condos for free when selling 10, or being able to ask for options to pay for the property at a later date , or buying houses in pre-foreclosure. He explained that you are unlikely to find anyone stupid enough to agree to such a deal.

A CBC reporter confronted Kiyosaki about the incident, in which he went from defensive, to playing ignorant of the incident, to blaming his partners.

Robert Kiyosaki's company, Rich Global LLC, filed for bankruptcy in 2012 after it was ordered to pay $23.6M to one of its earliest backers, The Learning Annex. The grounds for the lawsuit were that Rich Global did not give The Learning Annex their percentage of the profits. Kiyosaki later said that he did not shell out any of his own personal money to pay for the lawsuit and that the company was left bankrupt.

WTAE, a Philadelphia-based ABC-affiliated news company, covered Rich Dad seminars in Monroeville and Youngstown, Pennsylvania. They reported that the free seminars were mostly sales talk for another seminar costing $200.

Kevin Kacvinsky, a financial planner who attended a series of seminars in Pittsburgh and Las Vegas said that you could get all the information they gave from a book from Barnes and Noble. WTAE also interviewed a man from Tennessee who joined a class action lawsuit against Kiyosaki after spending $42K on seminars. The suit was dismissed because it was not filed in the right state.

Like Kiyosaki, John T. Reed is a successful real estate author who wrote many best selling books. He created an in-depth study on Robert Kiyosaki which exposed many inconsistencies with his claims and problems with the methods he teaches.

Here are just a few of the worrying inconsistencies with Kiyosaki and his methods:

The Rich Dad book series has a generally positive reception. Many real estate investors got their motivation from reading Kiyosaki's books.

Robert Kiyosaki and connected companies have a long track record of dubious practices.

There are tons of complaints that the lessons are subpar and that the refunds are not honored.

There are many upsells, and some extra costs are not stated clearly.

Kiyosaki distinctively separates the rich and poor, as if they are two different species.

30-day unconditional money-back guarantee Although there are many complaints that this guarantee is not honored.

Who Is Robert Kiyosaki? 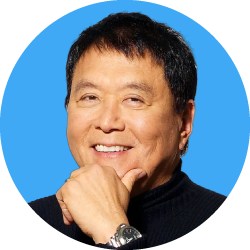 Robert Kiyosaki is a well-known real estate investor and educator from Scottsdale, Arizona. He is most known for co-writing the book Rich Dad, Poor Dad in 1997, which has sold over 44 million copies. Robert wrote many more books in the Rich Dad series. He also co-wrote Why We Want You To Be Rich in 2006, and Midas Touch in 2011 with Donald Trump.

Born in Hilo, Hawaii, Robert enrolled in the Merchant Marine Academy and graduated from King’s Point, New York in 1969. He joined the Marine Corps to fight in Vietnam in 1972-1973. Upon returning, Robert attended Erhard EST seminars, which he claimed changed his life. In 1997, he created a company called Rippers, which made Velcro wallets. Unfortunately, the venture was a bust and Robert went bankrupt. Robert took a job as a sales associate for Xerox until June 1978.

Little is known about Robert Kiyosaki from 1978 to 1997. He has been linked to being a part of the infamous MLM, Amway, prior to publishing Rich Dad, Poor Dad. In 1997, he launched Cashflow Technologies Inc., a business and financial education company that owns and operates the Rich Dad and Cashflow brands. He even has a board game in the style of Monopoly called CASHFLOW.

What Do You Get With Cash Flow Blueprint?

The Cash Flow Blueprint teaches you the three secrets to creating quick, positive cashflow. Your lessons come in 7 modules. The idea is to learn how to get yourself into the successful side (I) of what Kiyosaki calls the "cashflow quadrant." 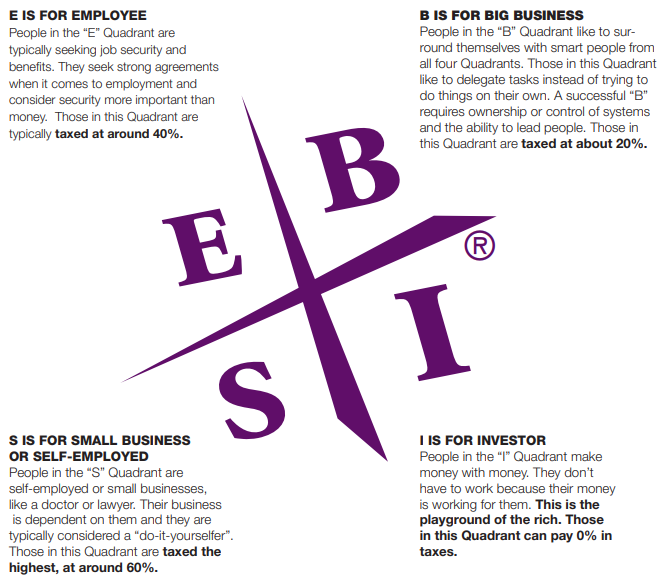 Are Students of Rich Dad Successful?

There is no shortage of testimonials on the official site.

There are, however, no success stories with any specific details. There has been some positive feedback on the course with details outside of the official site, but the success is quite minimal compared to the promises of Kiyosaki.

What there have been a lot of are complaints about the subpar quality of the course and unfulfilled refund guarantees. 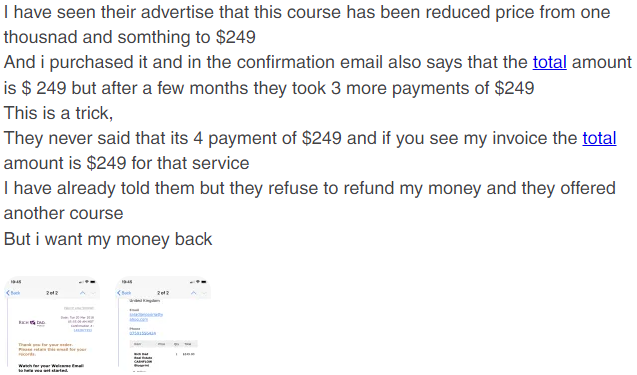 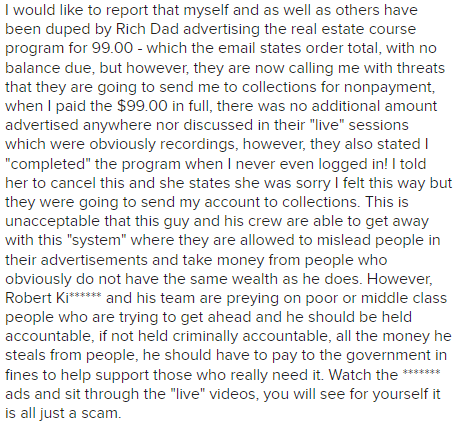 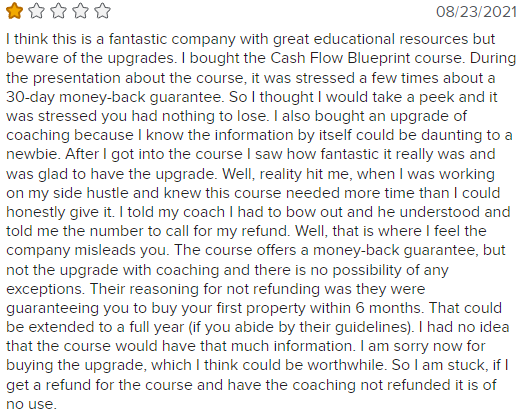 Keep in mind that most of the people who buy into the program don't have or did not file a complaint. Just be wary when deciding if this course is for you.

Is Real Estate Investment Worth It in 2022?

There are many different strategies for real estate investing, each trying to minimize the risks. Each has its own advantages and disadvantages. Here are some examples:

The Land Geek by Mark Podolsky specializes in investing in raw undeveloped land.

There are as many legit real estate investing courses out there as there are strategies. You just need to find which one best fits your situation and goals.

Why Local Lead Generation Is the Best Business Model in 2022

You need to learn a lot of things to be a successful real estate business owner. You also need substantial capital to cover the costs of properties and transactions. Then there's dealing with varying local laws and regulations, tenant issues, maintenance and property issues, or even natural disasters.

It will take some time to get your real estate business up and running from scratch before you can even start to automate it. There's also always the risk of negative cash flow.

Local lead generation holds an advantage in all these situations. You don't need a lot of capital to start your business; you won't be purchasing any properties. You don't have to deal with tenants, or maintenance, or any other issues involved in real estate.

As soon as you rank your site on search engines like Google and rent it out to local businesses, you immediately start earning a predictable passive income. This eliminates the risk of negative cash flow. To scale your business, all you have to do is to repeat the process. This makes Local Lead Generation the best model to create time and financial freedom for you. 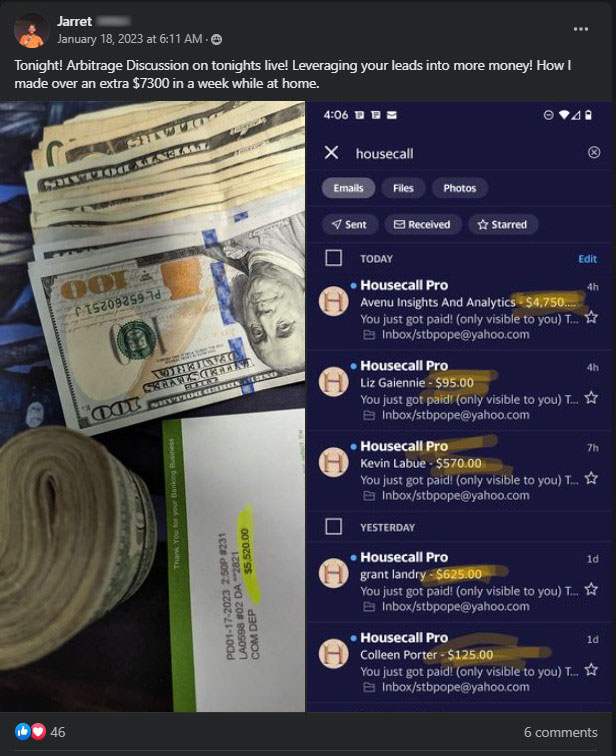